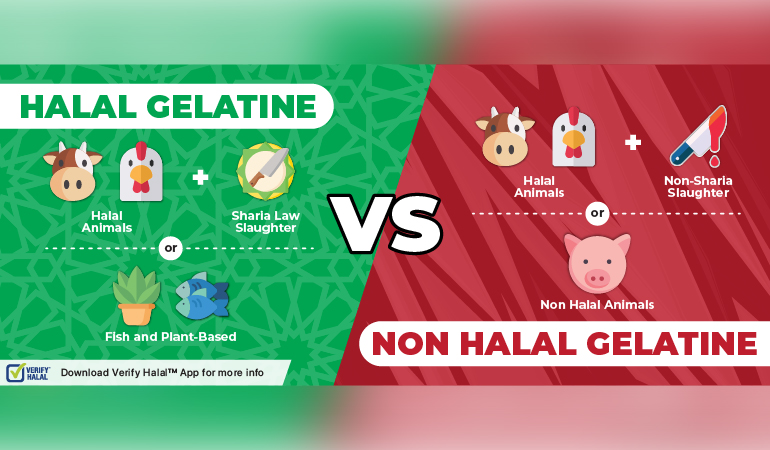 Since its first usage centuries ago, gelatine has been raising eyebrows across cultures and religious beliefs due to its manufacturing nature despite being essential in many products throughout human history.

Non-Muslims who avoid gelatine consumption or usage think that the making of gelatine which involves boiling down scraps of animal skin and bone distasteful.

Muslims on the other hand are always haunted by the questionable gelatine source where many tend to believe that it is made mainly from pork or halal animals that are not slaughtered Islamically.

Gelatin is an animal-derived product that is made from collagen tissue of various animal parts mainly bones and skins.

Its halal status depends on the nature of raw materials used in the process of making this controversial product.

Non-halal gelatine is commonly made from pork bones skins which is haram or not permissible for Muslims’ consumption or usage while halal gelatine is made either from bones or skins of cattle and calf skins or from demineralised cattle bones.

However, gelatine made from cattle and calf could also be non-halal if the slaughtering is not performed according to the shariah or Islamic law.

Likewise, gelatine derived from other halal animals like fish-skin is halal as long as it is not contaminated from other non-halal sources or not slaughtered according to shariah law.

Considered as one of the critical ingredients in the halal certification process, it often leaves halal certificate applicants and consumers perplexed and unsure of its halal status.

There are different alternatives to animal gelatine introduced in the market today such as the agar-agar (a plant-based gelling extract derived from algae).

Another alternative is Carrageenan a polysaccharide (galactan) extract of red algae for usage as a thickener, gelling agent, emulsifier and stabiliser in the food industry.

Pectin is a substance exclusively of vegetable origin. Pectin is present in large quantities in gooseberries, apples, quinces and citrus seeds and zest. Pectin is used as a thickener, stabiliser, gelling agent, and emulsifier.

Xanthan gum is a polysaccharide consisting of a combination of four compounds: the glucose, the mannose, the glucuronic acid and the pyruvic acid. It can be obtained from the action of a bacterium, Xanthomonas campestris.

It is also soluble cold and is used as a food additive for its properties of thickening, stabilising, foaming and gelling.

Another alternative could be Cellulose gum occurs as granular or fibrous powder, white or slightly yellowish or greyish, slightly hygroscopic, odourless and tasteless.