IN REMEMBRANCE OF AL-QARADHAWI, THE RENOWNED ISLAMIC SCHOLAR 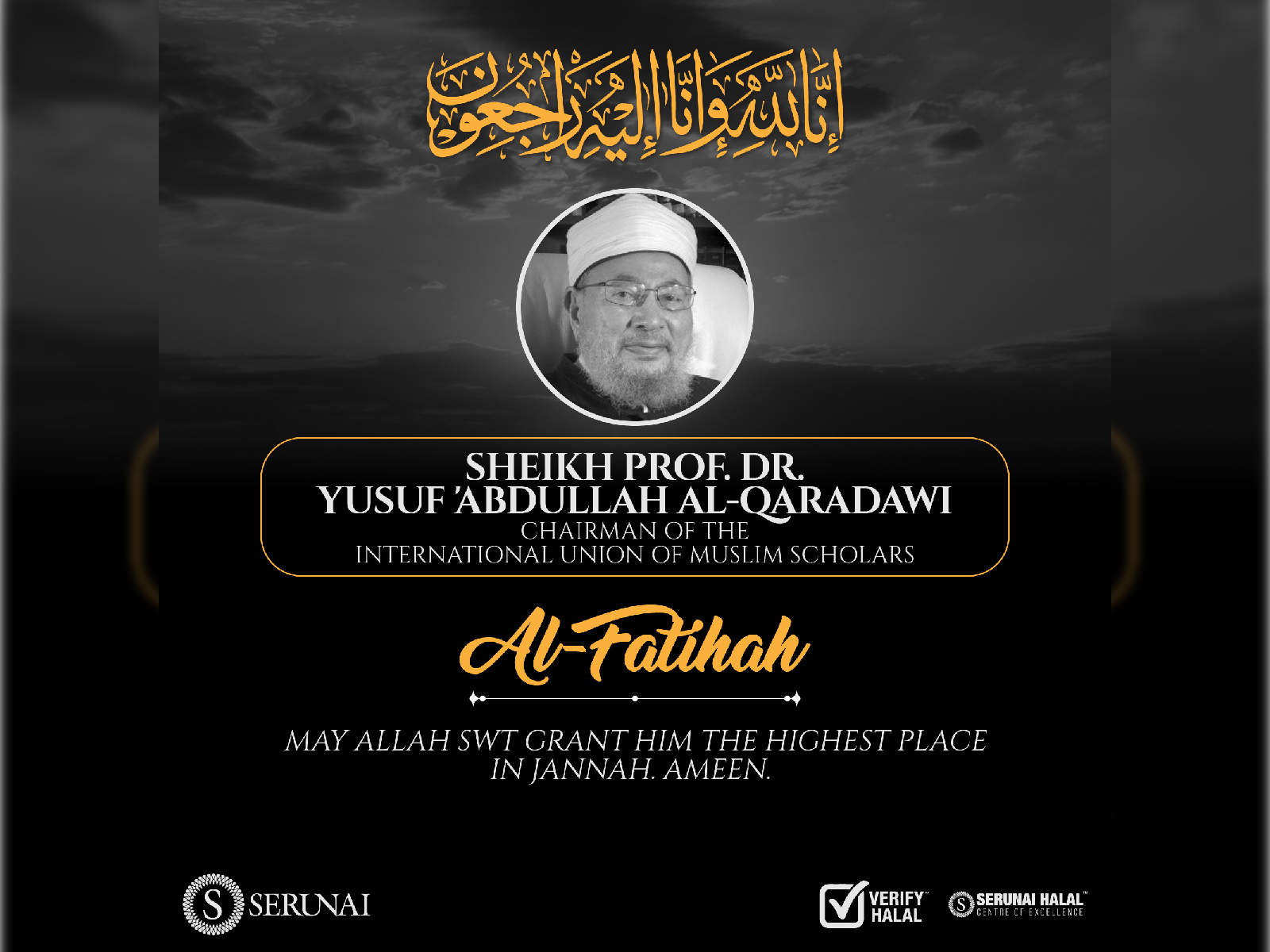 As the Malay saying goes, “Harimau mati meninggalkan belang, manusia mati meninggalkan nama” (A tiger dies and leaves its skin, a man dies and leaves his name). The world was shocked by the death news of a renowned Islamic scholar, Dr. Yusuf Abdullah Al-Qaradhawi on 26th September 2022 at the age of 96. He left behind his legacies of knowledge, striving spirit towards the truth and thousands of students and followers who will continue to spread the Islamic ideology and knowledge.

He was born Yusuf Abdullah Al-Qaradhawi on 9 September 1926 in a rural village near the Nile Delta in the Republic of Egypt during the British colonisation period. Although he came from a poor family and became an orphan at 2, he managed to read and memorized the Quran before the age of 10 under the raising and monitoring of his mother and maternal uncle.

During his first official education in Tanta, he met Hassan Al-Banna, the leader of the Muslim Brotherhood which left a big impression on him. He graduated from the Islamic Theology at the Al-Azhar University of Cairo and then obtained his Diploma from the Advanced Arabic Institute and completed his master’s degree in Quranic Studies in 1960.

His imprisonment several times by the Egyptian government made him leave Egypt for Qatar in 1961 and became the Head of the Qatari Secondary Institute of Religious Studies in 1962. He was then awarded the First Merit of Ph.D. degree from his thesis entitled “Zakah and Tts Effect on Solving Social Problems” in 1973.

During his life in Qatar, he continued contributing to society and the Islamic world by founding the Centre of Seerah and Sunnah and the Faculty of Shariah & Islamic Studies in 1977 where he was appointed as the dean. Due to his strong leadership and enthusiasm for Islamic studies, between 1990 – 1997 he held important positions at several institutions such as:

In 2011, Qaradhawi returned to Egypt after the 2011 Egyptian Revolution. During these days, he tries to unite the Muslims and other faith through several interfaith dialogues and called for peace in Egypt. He was known to be promoting moderate thought and harmonization.

Dr. Yusuf Al-Qaradhawi was known among scholars as a notable writer and freely expressed his opinions and scholarly view. He has published a variety of 200 works including a few notable books such as Fiqh Al-Zakat, Al-Halal wa al-Haram fil Islam, Fiqh al-Jihad, Fiqh al-Awlawiyyat, Fiqh al-Dawlah and others.

In the book entitled Al-Halal wa al-Haram fil Islam (Halal & Haram in Islam), he has helped the public to understand more about the subject matters and emphasizes that the authority to declare Halal and Haram is Allah alone. The book was written when there were no other scholars specifically discussing Halal and Haram, however, it was the main theme for conversation everywhere around the world.

Through the book, Qaradhawi has discussed the Islamic rulings between the Halal (permissible) and the Haram (prohibited) and has listed 11 of the basic principles to help societies to better understand these two philosophies. The argument in the book has also clarified the misconception that Halal is no longer just about food or drinks, but also relates to communication, finances, marriage and other aspects of life.

Besides sharing his knowledge and thoughts through books, Qaradhawi was also known as a consistent speaker of an Al-Jazeera Show called Shariah & Life, which the audience has reached 60 million. He co-founded Islam Online, a website sharing a lot of information about Islam, sunnah, shariah and the life of The Prophet where he was appointed as the Chief Religious Scholar. He was appointed as a member of the board of trustees of the Oxford Centre for Islamic Studies.

Due to his contributions to the Islamic world, he has been awarded and acknowledged by several renowned world leaders and organisations such as the Islamic Development Bank, the King of Saudi Arabia, Sultan Brunei, Yayasan Sultan bin Al-Owais of the United Arab Emirates, the Government of Malaysia, the Government of Qatar and more.

Throughout his life, we could see his dedication to spreading the right knowledge about Islam and his preaching towards peace and harmonization. Now it is the time for the Qaradhawi successors and other Muslims to sustain and continue his legacy and be a part of those who contribute to the development of Islam and the ummah.

Find out more on how we could assist with Halal certification matters at https://www.serunai.com/ or reach out to customerservice@serunai.com or Whatsapp at +6011 3362 7641.